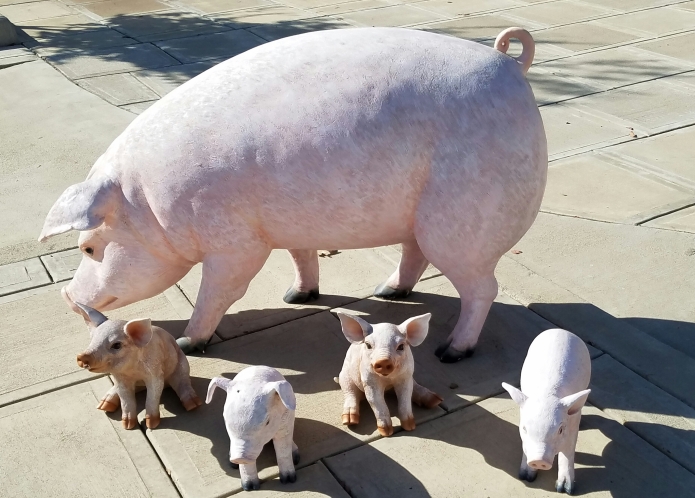 We headed out toward Oklahoma, but first we had some small town business to finish in Arkansas. First stop Russellville (pop. approx. 28,000) How could we not stop here?

We met some local folks  who were in the middle of preparing for a big fundraiser for the United Way. And weren’t we lucky that the main attraction happened to be a BBQ! Clearly, community spirit is alive and well in this small town.

Now this is a serious smoker! 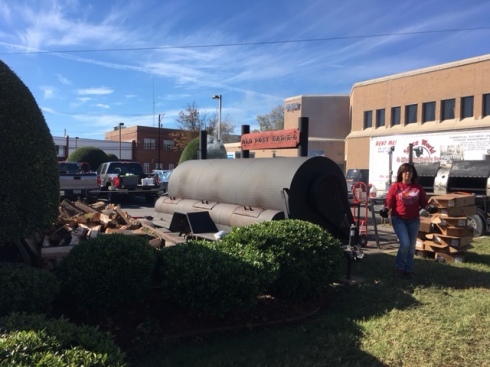 These little porkers on the sidewalk were the ones that got away.

Just down the road from Russellville is the historic town of Ft. Smith, nicknamed Hell on the Border. Founded in 1817 as a frontier military post, Ft. Smith later become known for its role in the settling of the “Wild West”.

This old Ft. Smith diner, which is a restored Pullman railcar, is overshadowed by a mural that gives a nod to the displaced Native Americans who had settled here. Notice the tear from her eye. 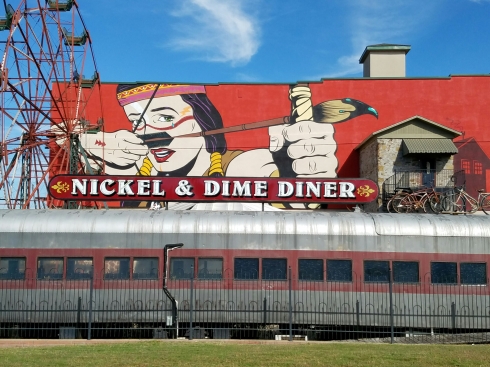 A wild, bustling town full of brothels, saloons and outlaws, the infamous Judge Isaac Parker, known as the Hanging Judge, was brought in to establish some law and order. His courthouse, which is on the National Register of Historic Places, had the dubious honor of being the site where “more men were put to death in the U.S. than in any other place in American history.”

One business that survived the  Hanging Judge’s “clean up”, possibly because of it’s powerful and politically connected clientele, was Miss Laura’s Social Club, a very successful and busy brothel with 9 bedrooms, one for each of the “girls”. Ironically, this house of ill-repute is now a very unique visitors center welcoming wayward travelers with open arms! It is the only former bordello on the National Register of Historic Places and has been fully restored to its original grandeur. According to our tour guide, there are still some people in Ft Smith who do not want this historical reminder left standing.

No, Rorie was not here for a job interview! 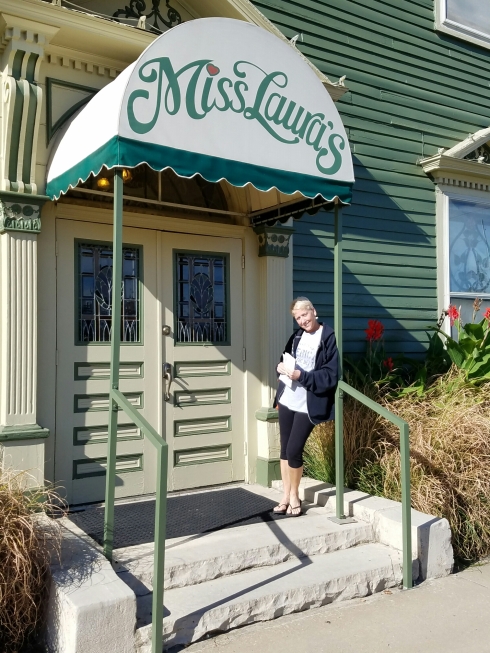 After a good week, Miss Laura would celebrate by filling the bathtub at the end of the upstairs hall with ice and champagne for both the girls and their clients.

Here is a picture of some of Miss Laura’s “girls” who lived and worked at the house. 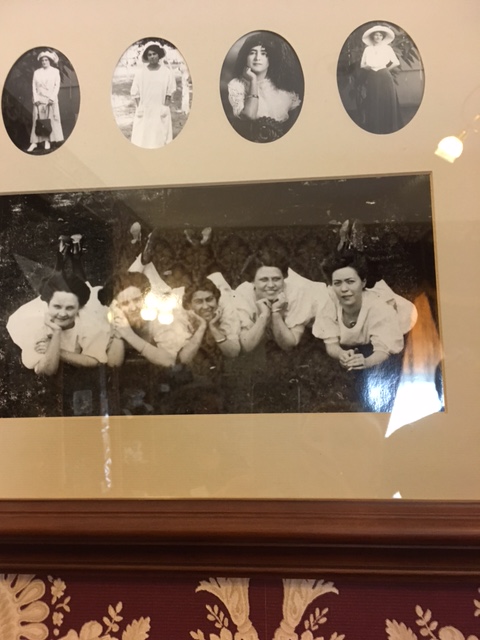 I like to mix and match patterns with the best of them but this is a little over the top. I was stunned, Bart was, shall we say, intrigued.

END_OF_DOCUMENT_TOKEN_TO_BE_REPLACED

With over 1,300 miles in our rear view mirror, we left Nashville and headed west towards our next destination – North Little Rock, Arkansas and its surrounding small towns. 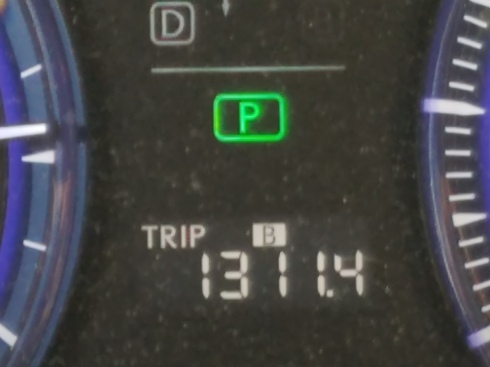 On our way we stopped in the town of  Hurricane Mills (population is 943), an unincorporated community in Humphreys County, Tennessee. The community is centered on Loretta Lynn’s Ranch (http://www.lorettalynnranch.net/main/), which features a small number of businesses and a post office. Each year, the ranch hosts several concerts and motocross races including the AMA Amateur National Motocross Championship, which it’s hosted since 1982.

Crossing over the mighty Mississippi River, we were surrounded by farmland in every direction…not a gas station or roadside McDonalds in sight. Rural America at it’s finest. We did, though, see a cloud of smoke in the horizon and wondered what it was. As we got closer it appeared to be a controlled burn on farmland to our south. Anybody have marshmallows and a stick?

After a good night’s sleep, we headed out to the first stop on our Arkansas itinerary: Murfreesboro, AR (population 1,764). It was 132 miles to this small town, which has a surprising number of lakes, parks and other sights to see – including the 1,000 year old Ka-Do-Ha-Indian Village and Museum. This preserved archeological site provides a glimpse into the culture and life of these Indian “Mound Builders”.

Diamonds Old West Hotel and Cabins are set on 40 acres nestled in the foothills of the Ouachita Mountains. They take you back to the look and feel of an old west frontier town – all the buildings you would expect to see (http://www.diamondscabins.com/). Gunsmoke’s Miss Kitty would be honored! 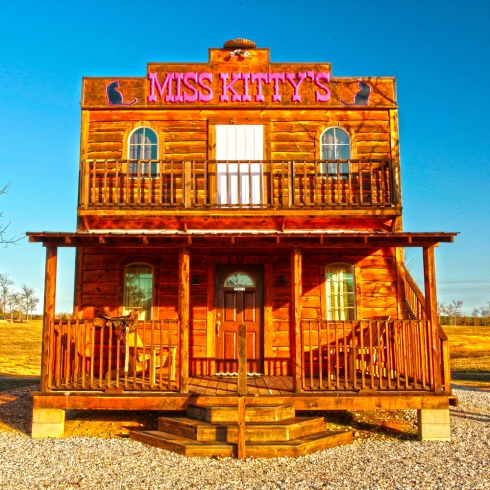 Next we headed to Murfreesboro’s most famous attraction, the Crater of Diamonds State Park where over 75,000 diamonds have been found since 1906. The crater, which was formed by a massive volcano, is the only diamond-producing area in the world open to the public. 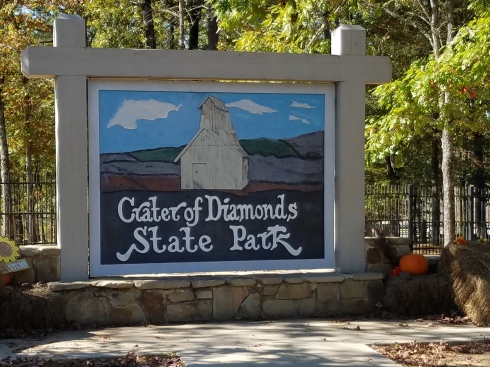 Rorie, aka “Diamond Lil”, and her trusty mining partner Bart were on the hunt for big gems like the huge “Lucky Diamond” valued at $500,000 found just last month in less than an hour by Dan Frederick and his daughter Lauren.

After getting a quick lesson on mining, and renting everything we needed to find that million dollar diamond in the rough, off we went to search for diamonds and other precious stones in a 37 acre field of gravel and dirt. Prospecting is back breaking work but notice who’s doing the shoveling! Bart was responsible for sifting, rinsing and spotting the dirt-covered hidden jewels. 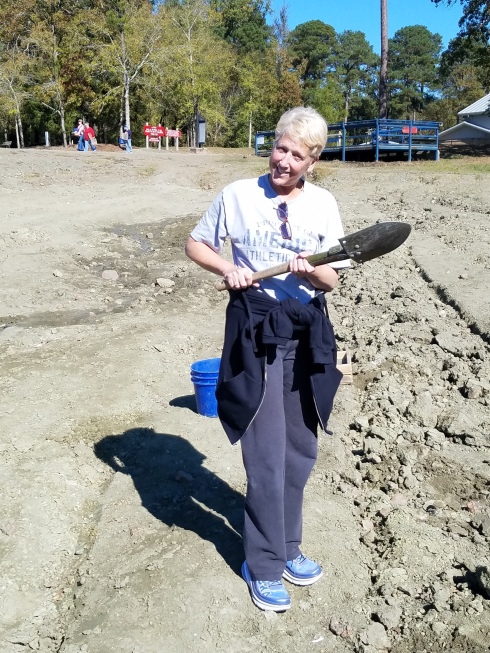 Tools of the trade

How’d we do? Well we were absolutely positive we struck it rich with our finds only to be told by the experts that what we thought were a milky white diamond, black diamond and chunks of amethyst were in fact white quartz, lava rock and jasper! Disappointing results but we had a blast. I guess we’ll just stick with dreams of winning the lottery…it’s a lot less work.

The fruits of our labor. Not the rare gems and jewels we thought but still quite a haul!