NOTE: Some may think the Tour is too focused on food, but we’ve found that the townies we meet love to “tell us where to go”. Plus, discovering great local eateries brings us to cool parts of the towns we’re visiting AND introduces us to hometown folks with great inside info and stories to tell. Read on…

After a long, grueling ride from Abilene, TX, through towns like Clyde (pop. 3,734 – Bart’s Dad’s middle name), Cisco (pop. 3,899 – birthplace of  Darrell “Dash” Crofts of the music duo Seals and Crofts), Terrell (pop. 15,816 – where actor and musician Jamie Foxx lived and graduated from school), we crossed through small Louisiana communities like Rustin (featured by Jack Kerouac in his book On the Road), site of the annual Rustin Peach Festival.

We continued on over the Mississippi Bridge to our final stop of the day – Vicksburg, MS (pop. 23,856).

Vicksburg has an interesting history as a strategic Confederate site that was practically impenetrable because of it’s location on a high bluff and on the Mississippi River. General U.S. Grant was ordered to capture the City, and during the Winter of 1863, he put his Army aboard transports and moved downriver from Memphis. Floodwaters prevented Grant from marching over the land from the river against Vicksburg, and Confederate cannons on Vicksburg’s bluffs made it impossible to move the army by boat past the city to attack from below. 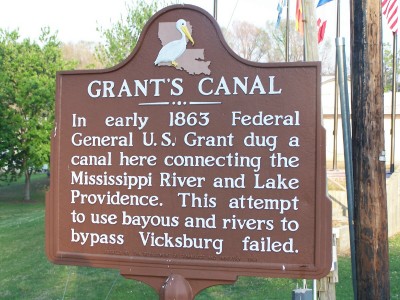 Eventually, Vicksburg surrendered during the 47 day Siege of Vicksburg. The surrender of the City by Confederate General John C. Pemberton on July 4, 1863, together with the defeat of General Robert E. Lee at Gettysburg the day before, marked the turning point in the Civil War in the Union’s favor.

Vicksburg’s historic architecture is stunning. Cedar Grove, built in 1852, is one example.

During the War, Cedar Grove was struck by a cannon ball, which is still lodged in the parlor wall. The house is one of many in town that’s said to be haunted.

The Beck House is another example of Vicksburg architecture from the Antebellum period. 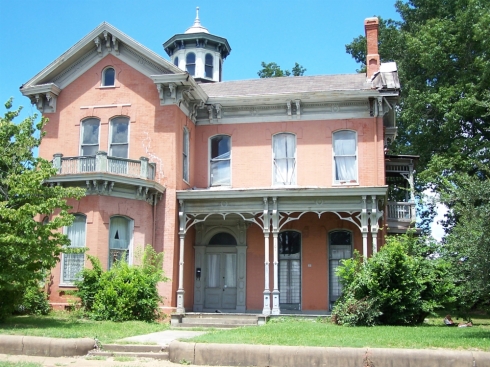 The Old Vicksburg Courthouse is now a Civil War museum. 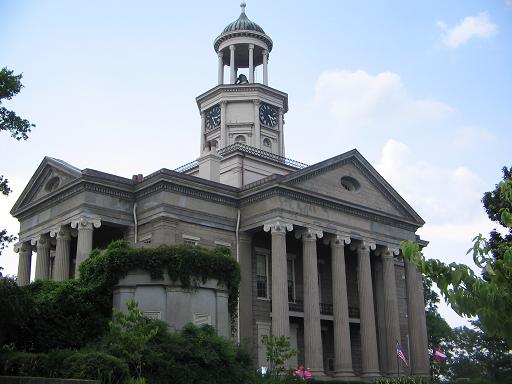 After checking out the gracious old buildings, it was getting late and finding some good “Vicksburg Vittles” was foremost on our mind.

Rusty’s Waterfront Grill is a great southern comfort and seafood restaurant right by the Mississippi River at the end of the historic section of downtown Vicksburg. Another example of a wonderful recommendation by a local. 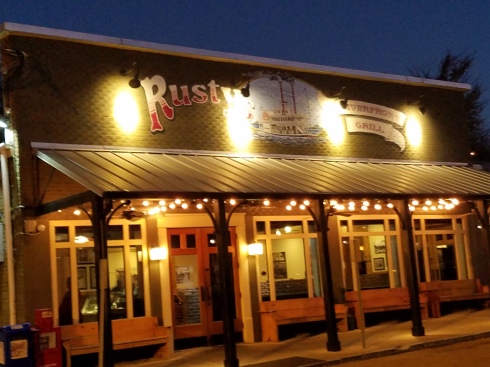 All that was left of a bowl of jalapeño hush puppies and chipotle mayo dipping sauce. We were trying to make sure we achieved the RDA for the “grain” and “dairy” groups on the food pyramid.

You can’t be in MS and not try some gumbo loaded with sausage and local seafood. Well, you could pass on it but why would you want to?

Rorie opted for this behemoth Gulf shrimp po’ boy. She would like it to be clear that she did not eat the roll…like that really matters!

Bart went the healthy and safe root with fresh grilled Grouper accompanied by sides of mayo-laden dipping sauces. Yes, it came with fries (not pictured).

The downtown historic section of Vicksburg is really beautiful and all decked out for Christmas. Loaded with museums, historic homes, brick paved streets and oozing Southern charm, it’s definitely a wonderful place to stroll.

2 thoughts on “The Tour takes on small town TX, Loo-zee-an-uh and Miss-iss-i-ppi”